This year’s Unamuno Friend of Protestants Award went to the Town Hall of Santiponce in Seville, Spain.

About a hundred people, including local and national institutional and political representatives, as well as evangelicals from all over the country, gathered in the Monastery of San Isidoro del Campo, recognized for its work in recovering Protestant historical heritage.

Juan Antonio Monroy, honorary president of the Spanish news site Protestant digital, was responsible for delivering a commemorative plaque for the award. It was received by the mayor of the city, Justo Delgado Cobo, on behalf of the City Council.

461 years ago, in this very place, a group of twelve hieronymite monks, including Casiodoro de Reina and Cipriano de Valera, came into contact with the Bible and embraced the ideas of the Reformation, which led them to flee to other parts of Europe to save their lives amid the persecutions of the Inquisition.

Almost half a century later, the monastery welcomed Spanish Protestants in a friendship ceremony, reconciling them with a past that for many remains unknown.

The rehabilitation of the monastery as a cultural and historical space, the statue dedicated to Casiodoro de Reina right in front of the noble building, and the creation of a commemorative review on the figure of Casiodoro were some of the arguments evoked to give the prize to Santiponce.

Pedro Tarquis, Managing Director of Protestant Areopago – media platform that brings together information sites Protestant digital, Evangelical focus and Evangelical Digital – recalled the suffering and cruelty experienced in this place, which today has turned into gratitude, friendship and recognition.

“Santiponce made a real act of historical memory with the Protestants, and that’s why we recognize him with this award, â€said Tarquis.

The president of the Spanish Evangelical Alliance (AEE), Marcos Zapata, highlighted the spirit of tolerance and freedom of Casiodoro de Reina, who was persecuted, and not only in Spain, as an example for today.

For Emilio Carmona, Secretary General of the EEA, â€œProtestants want to take a stand for those who support freedom of conscience and expression. We don’t want to be a lobby claiming our own rights, but the rights of everyone â€.

â€œThis is what defines Spanish Protestantism: a passionate minority that gives its life for the good of all,â€ Zapata added.

Historian Antonio Simoni reviewed the history of Santiponce, a city full of famous personalities, among whom Casiodoro and his Spanish translation of the Bible stand out as an invaluable legacy.

Simoni explained that â€œin 1562 an effigy of Casiodoro was burned. 460 years later, a statue was unveiled here, writing a historical page for our country, since it is the first statue dedicated to a Protestant â€. 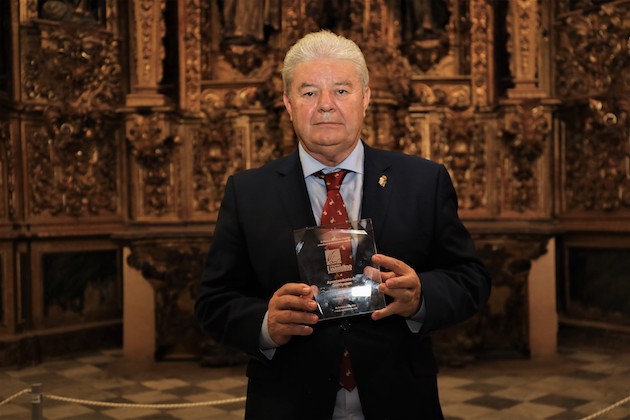 Mayor Justo Delgado Cobo received the award on behalf of the Municipality of Santiponce / MGala.

“Casiodoro de Reina has remained faithful and left us a wonderful legacy, that of bringing the Bible closer to everyone, because it has the capacity to change our society,” said Carmona.

After receiving the award, the Mayor of Santiponce, Justo Delgado Cobo, underlined that â€œCasiodoro’s vision is the one that many of us have: the one dreams can be made and not just for ourselves, but for the good of manyâ€.

The Mayor expressed his gratitude for the award and his support for building a society where ideas are not persecuted and where the common good is sought.

The Unamuno Prize, Friend of Protestants became an important event for Protestantism in Spain, allowing it to strengthen ties with society and build bridges based on friendship with those who do not share the same faith. 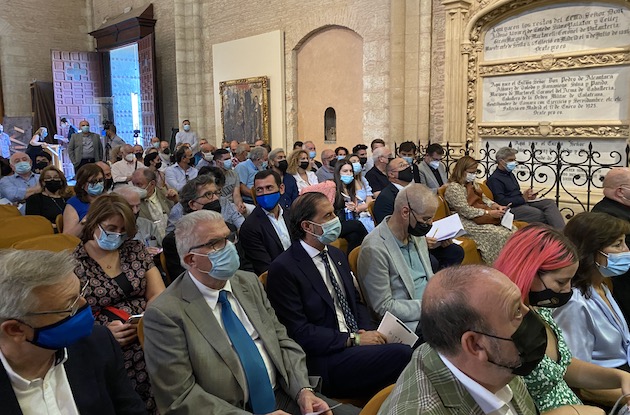 Participants at the ceremony / Daniel Hofkamp.

The award takes its name from well-known friendship between Miguel de Unamuno and Pastor Atilano Coco, who was shot during the Civil War.

It is his 13th edition. Intellectuals and writers like Antonio MuÃ±oz Molina, JosÃ© Luis VillacaÃ±as; politicians such as JosÃ© MarÃ­a CalviÃ±o; and also different entities, among others, have already received the award.