LONDON — Following the death of Queen Elizabeth II, tens of thousands of mourners lined up to lay flowers outside the gates of Buckingham Palace. Along the banks of the Thames, hundreds of thousands more lined up, ready to stand in line for 30 hours, if necessary, to bid farewell to their late ruler.

The multitudes, though eager to honor the memory of their beloved monarchy, were far less interested in praying for her soul.

On Monday, around 150 people showed up for a midday Requiem Eucharist at Westminster Abbey, the site of his 1947 wedding, his coronation in 1953 and the place where his funeral would take place, a week from now.

Attendance at Evensong a few hours later was also low.

Those who attended could glimpse the place where Elizabeth swore 70 years ago to “uphold the Laws of God and the true profession of the Gospel”, where she kissed the Bible, recited the Creed of Nicaea, received Communion and was anointed with holy oil before receiving his crown and sceptre.

Although Her Majesty was much loved, there is less enthusiasm for the Church of England, which she oversaw as Supreme Governor. During this second Elizabethan era it was the royal crown, not the archbishop’s miter, that inspired great devotion; the sceptre, and not the shepherd’s staff, which the citizens came to adore.

In much of the kingdom, the established church is slowly fading away.

“Britain has become a more multi-ethnic society over the past 70 years. And indeed the churches, the religious institutions, which have grown are largely in the immigrant population,” said Stephen Bates, elder correspondent of religious and royal affairs for the Journal des Gardiens.

“In 1952, when the Queen came to the throne, the Church of England was a more influential body and more people participated in it. It is in long-standing and long-term decline,” he said. .

Church of England parishes were losing members at the dawn of his reign. The decline continued for seven decades.

In 2020, with raging covid-19 and restricted public gatherings, attendance has dropped even further.

In many parishes it has not yet recovered.

Today less than one in 100 Britons worship in an Anglican parish on a typical Sunday.

After the Queen’s death, many churches (Anglican and otherwise) opened their doors so that mourners had a place to light candles and pray.

At Canterbury Cathedral, a steady stream of visitors laid bouquets of flowers near the entrance or showed up to sign condolence books. Most came out soon after.

Those who remained were invited to attend A Requiem for Her Majesty Queen Elizabeth II.

After receiving the body and blood of Christ, they asked God to bring “our late Queen Elizabeth and all faithful departed, into the presence of your eternal home”, then concluded by singing “God Save the King”.

Regardless of what others did, Queen Elizabeth remained a staunch and faithful member, regularly attending services and speaking openly about her faith, especially during her annual Christmas addresses to the nation.

In an increasingly secular Britain, the testimony of the sovereign is noticed.

“Some people had started saying she was the last true believer in the country,” Bates said.

In this kingdom, church and state have intermingled almost since its founding, especially since Henry VIII wrested control of religious affairs from the Catholic Church.

While rejecting Rome, Henry and his successors retained the title that Pope Leo X had conferred on him: Defender of the Faith. The Latin abbreviations on each pence and each pound are a reminder that the House of Windsor holds power “By the Grace of God”.

Faith, for Elizabeth, was more than just a tradition, Bates said. The Bible was the word of God; not just King James’.

“I think the one thing – of many – that you can say about the Queen’s religious belief is that it was not about cultural deism: she was deeply rooted, serious, personal and heartfelt, perhaps more than any monarch since the Middle Ages,” Bates said.

But its willingness to welcome people of all faiths has made it popular, not only among Anglicans but also with other Protestants, Catholics, Muslims, Hindus, Sikhs, Jews and others, Bates said.

Ali McMillan, a deacon who ministers at Methodist Central Hall, opposite Westminster Abbey, was 6 when she met Queen Elizabeth.

Thirty-two years later, she has a photo of the encounter she cherishes, along with memories of a monarch who she says was truly a servant leader.

“She truly served the people and the country every moment,” McMillan said.

During her 96 years, Elizabeth was not only a model monarch, but also an exemplary follower of Jesus Christ, McMillan said.

Rather than focusing on Santa Claus, reindeer and the North Pole, Queen Elizabeth focused on Jesus, the manger and Bethlehem, McMillan noted.

“Each year in her Christmas message, she always talked about her faith, about who Jesus was for her,” she said. “She was such a woman of faith and she had a real personal relationship with God. It showed in the way she spoke and how much she prioritized her faith in everything she did.”

Like the Anglican Church, the Methodist Church in England has seen its membership and attendance plummet in recent decades.

But some congregations, including the one that meets at Methodist Central Hall, are growing, and McMillan is convinced better days are ahead.

“We keep hope in God and pray that God has a plan for us. We are a church of death and resurrection, after all,” she said.

In Canterbury on Sunday, British families flocked to the city’s historic cathedral, stopping to lay flowers, light candles or sign a book of condolences honoring the memory of Queen Elizabeth II. With Church of England attendance having fallen sharply in recent years, most mourners have not stayed to pray for the soul of their deceased monarch. (Arkansas Democrat-Gazette/Frank E. Lockwood) 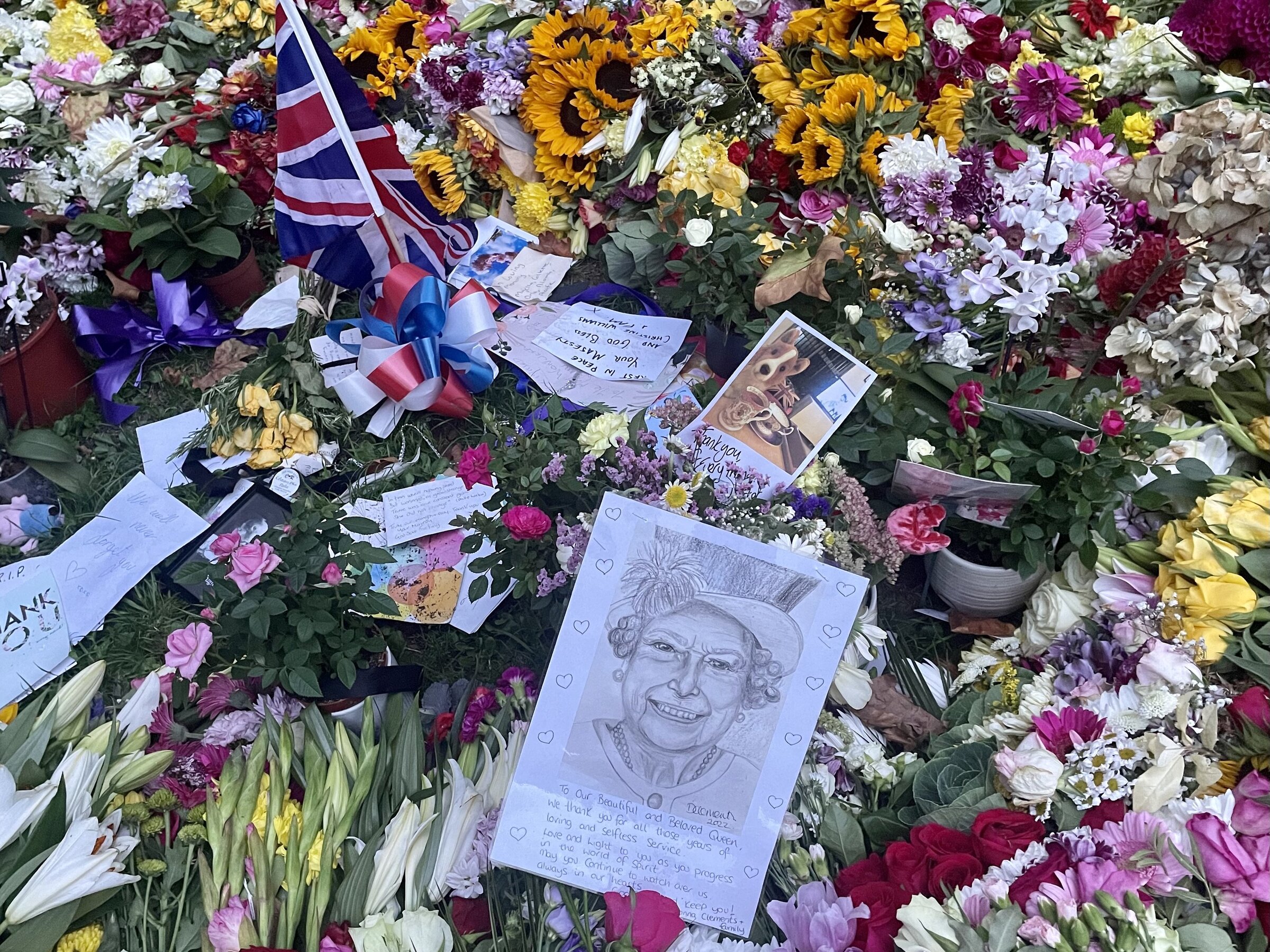 Admirers of the late Queen Elizabeth have laid bouquets of flowers in churches and government buildings across London. (Arkansas Democrat-Gazette/Frank E. Lockwood)