BERLIN — Germany’s highest court on Tuesday dismissed a case calling on a local church associated with Protestant instigator Martin Luther to remove an ancient anti-Semitic sculpture from its wall.

Known as “Judensau” (sow of the Jews), the 13th-century bas-relief in the city church of Wittenberg, eastern Germany, depicts a rabbi looking into the anus of a pig, while other characters suck milk from its teats.

The hateful symbolism is that the Jews get their sustenance and scriptures from an unclean animal.

A local Jewish man had appealed to the Federal Court of Justice in Karlsruhe after a local court rejected his claim that the sculpture was insulting to Jews and should be removed.

Although the court agreed that the content of the sculpture was offensive, it concluded that the church had taken sufficient steps to counter this by installing a memorial and an information board.

The engraving was “anti-Semitism set in stone,” the court said, but the memorial and information panel allowed for “clarification and discussion of the content…in order to counter exclusion, hatred, and stigma.” defamation”.

Many medieval churches had similar “Judensau” carvings, which were also meant to send the clear message that Jews were not welcome in their communities.

Another example can be seen at the famous Cologne Cathedral.

But the importance of the Wittenberg relief is linked to Luther, himself a notorious anti-Semite, who preached there two centuries later.

It was in Wittenberg that Luther is said to have nailed his 95 Theses to the door of another church in 1517, leading to a split with the Roman Catholic Church and the birth of Protestantism. 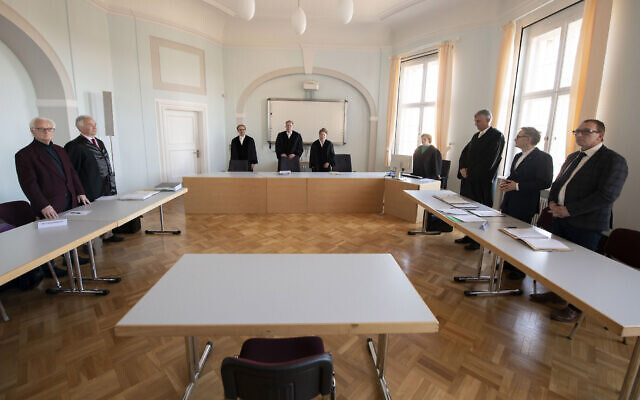 The theologian argued that Christians cannot buy or earn their place in heaven, only enter by the grace of God, marking a turning point in Christian thought.

But Luther has also been linked to Germany’s darkest history, as his later sermons and writings were marked by anti-Semitism – something the Nazis would later use to justify their brutal persecution of Jews.

The court’s decision not to order the removal of the remedy can still be appealed to the German Constitutional Court.

Supporting The Times of Israel is not a transaction for an online service, like subscribing to Netflix. The ToI Community is for people like you who care about a common good: to ensure that balanced and responsible coverage of Israel continues to be freely available to millions of people around the world.

Of course, we’ll remove all ads from your page and you’ll have access to great community-only content. But your support gives you something deeper than that: the pride of joining something that really matters.

Join the Times of Israel community

Already a member? Log in to stop seeing this

You are a dedicated reader

We’re really glad you read X Articles from The Times of Israel over the past month.

That’s why we started The Times of Israel ten years ago – to provide discerning readers like you with must-read coverage of Israel and the Jewish world.

So now we have a request. Unlike other media, we don’t have a paywall in place. But since the journalism we do is expensive, we invite readers to whom The Times of Israel has become important to help support our work by joining The Times of Israel community.

For just $6 a month, you can help support our quality journalism while benefiting from The Times of Israel WITHOUT ADVERTISINGas well as access Exclusive content only available to members of the Times of Israel community.

Thanks,
David Horovitz, founding editor of The Times of Israel

Already a member? Log in to stop seeing this