Composer Nigel Butterley died in Sydney on February 19, 2022 after a long illness just two months before his 87th birthday. Along with Peter Sculthorpe (1929-2014) and Richard Meale (1932-2009), Butterley was the third member of this triumvirate of Sydney-based composers whose music created a new contemporary outlook for Australian music. Each new work by Butterley was eagerly awaited and hotly discussed.

Nigel Henry Cockburn Butterley was born in Sydney on May 13, 1935. His middle-class family was steeped in literature, music and the church. His father was a prep school principal who had a beautiful singing voice. His mother Nora played piano and violin and was a close friend of Patrick White. The family line included various Anglican clerics, notably his older brother Harlin who became Dean of Hobart (1972-80). In 1954, 19-year-old Nigel joined the choir at St Andrews Cathedral. It was in this rich English choral tradition – Byrd, Purcell, Herbert Howells and Vaughan Williams – that he found his first musical identity. He went on to compose music for the Anglican liturgy and play the harmonium in suburban churches and was choirmaster at St Alban’s in Epping.

Butterley began playing the piano at the age of four and for several years took lessons from Edith Shadforth Cooper who provided him with solid piano technique and introduced him to the music of Bartók and Hindemith. She also encourages him to compose.

In 1955 the 20-year-old became a trainee specialist in the ABC’s music department and was soon sent to Adelaide where he produced specialist radio music programmes. After 18 months he returned to Sydney where, while working with ABC Radio, he studied privately with Noel Nickson and Raymond Hanson. In late 1961, he was transferred to the ABC’s religious broadcasts department from which he drew much inspiration. At the same time, he took an interest in early music, took part in Daniel’s game in 1962 and editing Herod’s Game in 1964. He also played continuo harpsichord and edited baroque music scores.

Earlier, in London, he had been inspired by hearing the music of Michael Tippett and had requested lessons from the master. Instead, Tippett directed him to South African composer Priaulx Rainier, herself a student of Nadia Boulanger. Traveling in France and Italy, he saw an extraordinary moment of revelation, musical and religious, where he conceived the fusion of the different churches he visited and the new techniques absorbed by Rainier. Back in Australia, he wrote Lauds for 11 instruments, premiered at the Adelaide Festival in 1964. It was a groundbreaking piece that served as a sort of prelude to what was to follow

Commissioned by ABC Radio, In the head, the fire was 29 minutes tour de force radio musical techniques. In 1966, he won the Prix Italia, ahead of Berio Worker 2. (A live version of it, prepared from Butterley’s sketches, all meticulously cataloged in the National Library, was performed by the Arcko Symphonic Ensemble in Melbourne in October 2015.) The award made headlines in Australia and brought the normally reserved and taciturn composer to national attention.

Since the Three Serenades for tenor and piano (1954), sets by Sacheverell Sitwell, which Butterley designated as his official “Opus 1”, poetry gave critical impetus to his work. In the early 1970s, he experienced a sort of “liberation” with the discovery of the poetry of Walt Whitman. Since 1990, the strongest influence on Butterley’s vocal music has been English poet-scholar Kathleen Raine. The woven light (1994) for soprano and orchestra and unseen paradise (2001) written for The Song Company were both staged performances of his poetry. It was also the main source of the text of creation spellfor soloists, choir and orchestra, the Paul Lowin Orchestra Prize in 2001.

Butterley was also heavily influenced by the music and ideas of composers like Tippett, Messiaen, Cage and, more recently, Sofia Gubaidulina. It was Cage’s creation of the prepared piano that opened up new vistas for Butterley as both composer and performer. He estimates that he gave perhaps 30 performances of Cage’s Sonatas and interludes. Attending one of Butterley’s performances in Sydney in March 1976, Cage himself declared it to be the “most thoughtful” realization of his plays he had come across.

During his early professional years, much of Butterley’s business was centered around Beecroft, the leafy suburb of Sydney’s Upper North Shore where he lived with his mother and sister. He co-founded the Beecroft District Music Club which featured local musicians performing new works, especially young composers to whom he became a mentor, guide and close friend.

Among the musicians featured in these concerts was his ABC colleague Ian Farr, a composer with whom Butterley formed a piano duet team. For Captain Cook’s bicentenary in 1970, Butterley composed a piano concerto, exploring, which Farr premiered with the Sydney Symphony Orchestra. Butterley liked to recount the responses of Queen Elizabeth II and the Duke of Edinburgh. “Do you hate the piano so much? inquired the Duke, while the Queen wondered when Farr was going to “get [his] own back”. Incidentally, Butterley was not particularly comfortable with titles; he offered a bottle of wine to friends if they found good titles.

With an inheritance, Butterley moved from Beecroft to Stanmore where he bought a fine three-storey Federation house, which he set about renovating and planting a garden of native Australian plants. Now removed from Beecroft’s social restrictions, this decision encouraged him to be more open about his sexuality. Whitman and other gay poets helped him establish an open relationship with his partner Thomas (Tom) Kennedy, a former drummer, whom he had met in 1981. This was when the piece was written for string orchestra. Goldengrove (1982), commissioned by Kim Williams, that Kennedy had a near-fatal car accident. song, the second movement of this work was Butterley’s response to the calamity that had befallen his young partner. 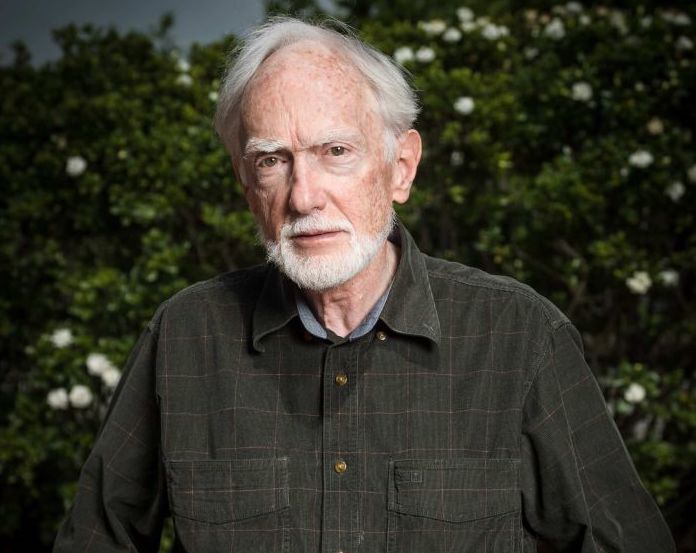 For more than 15 years, Butterley was one of the principal planners of ABC’s orchestral and radio programs. It was a fruitful period, loosening a flow of orchestral pieces for which there were performance and recording opportunities ready. Among the memorable pieces from this period were two works for the Sydney Proms, Interaction with the painter John Peart, and First Day Covers, the hilarious collaboration with Dame Edna Everage (aka Barry Humphries). fire in the skies was written for the Sydney Opera House’s opening season in October 1973 and first performed by the Cleveland Orchestra under Lorin Maazel.

Tired of the bureaucratic constraints of the ABC, Butterley joined the staff of the Newcastle Conservatorium in 1973, later becoming a lecturer. In 1991 he retired from university, with the help of a four-year Australian Creative Fellowship. That same year he became a Member of the Order of Australia and in 1996 he received an honorary doctorate from Newcastle University. Freed from teaching, he became a composer for his community, embarking on an extensive freelance program of radio programs, teaching composition at the Sydney Conservatorium and working with student composers at HSC. A stream of chamber and vocal pieces flowed from that time until a few years ago when illness robbed him of his ability to compose. An order from Australia Ensemble had to be cancelled.

Unlike others of his generation, Butterley cut the image of a reserved and undemonstrative, contemplative and even reticent creative figure, almost every work having a philosophical or even mystical underpinning. He has written music for almost every platform imaginable, dozens of works for everything from children’s recorder groups to full-scale symphonic structures. Curiously, he doesn’t seem particularly drawn to works of opera or musical theatre. His only opera Lawrence Hargrave flying alone (1988) was produced by the Sydney Conservatorium as a major bicentenary project and its opera stage The owl (1983) was composed for soprano Joan Carden.

Too many of Butterley’s pieces are little known and no longer heard today.

With its disappearance, Australian music is loosening another link in its temporality, this period of transition from transplanted English pastoralism to unbridled contemporary post-modernism. We would do well to reacquaint ourselves with the music of Nigel Butterley at every opportunity.