Russia-led referendums that could lead to the annexation of 15% of Ukrainian territory were due to end on Tuesday, with the Kremlin saying it had taken no decision on closing its borders, the first mobilization since the Second World War. World War that prompted some to flee.

Voting in Ukraine’s eastern and southeastern provinces of Luhansk, Donetsk, Kherson and Zaporizhzhia began on Friday and was dismissed as a sham by Western nations, who pledged not to recognize the results.

A man walks with his bicycle past banners informing about a referendum on joining Russian-controlled regions of Ukraine to Russia, in the Russian-controlled town of Melitopol in Zaporizhzhia region, Ukraine, September 26 . The banner reads: “Future. September 23-27, 2022”. PHOTO: Reuters/Alexander Ermoshenko.

In Russia, the recall of some 300,000 reservists has led to the first sustained protests since the invasion began, with a monitoring group estimating that at least 2,000 people have been arrested so far. Any public criticism of Russia’s “special military operation” is prohibited.

The head of the Russian Orthodox Church said Russian soldiers who died in the war against Ukraine would be washed away from all their sins, days after President Vladimir Putin ordered the country’s first mobilization since World War II.

Patriarch Kirill is a key Putin ally and supporter of the invasion. He has previously criticized those who oppose the war and called on Russians to rally around the Kremlin.

“Many die on the fields of internecine warfare,” Kirill, 75, said in his first speech on Sunday since the mobilization order. “The church prays that this battle will end as soon as possible, so that as few brothers as possible will kill each other in this fratricidal war.”

“But at the same time the church realizes that if someone, driven by a sense of duty and the need to fulfill their oath…will do what their duty requires of them, and if a person dies in the performance of this duty, then they have undoubtedly committed an act equivalent to the sacrifice. They will have sacrificed themselves for others. And therefore, we believe that this sacrifice washes away all the sins that a person has committed.

Russia says it is calling in some 300,000 more troops to fight in Ukraine, in a mobilization campaign that has stoked public anger, led to an exodus of military-age men and sparked protests across the country.

Kirill’s support for the war in Ukraine drove a wedge between the Russian branch of the Orthodox Church and other branches of Orthodoxy around the world. Pope Francis, leader of the Catholic Church, has been a vocal opponent of the war and appeared to berate Kirill’s position in several public speeches, including earlier this month when he said God did not support the war.

Flights from Russia sold out and cars crowded border checkpoints, with reports of a 48-hour queue at the only road border to Georgia, the rare pro-neighbour. which allows Russian citizens to enter without a visa.

Asked about the possibility of closing the border, Kremlin spokesman Dmitry Peskov told reporters on Monday: “I don’t know anything about it. At the moment, no decision has been made on this.” .

Russia has millions of veterans called up as official reservists. Authorities have not specified who should be called, as this part of President Vladimir Putin’s order is classified.

The mobilization also saw the first sustained criticism of the authorities within the state-controlled media since the start of the war.

But Sergei Tsekov, a senior lawmaker who represents Russia’s annexed Crimea in Russia’s upper house of parliament, told the RIA news agency: “Anyone of conscription age should be banned from traveling to the stranger in the current situation”.

Moscow says it wants to rid Ukraine of nationalists and protect Russian-speaking communities. Kyiv and the West describe Russia’s actions as an unprovoked war of aggression.

“The situation (…) is particularly serious,” he said. “We are doing everything to contain enemy activity. This is our No. 1 objective at the moment because Donbass is still the No. 1 objective for the occupiers,” referring to the wider region that encompasses Donetsk and Lugansk.

Last week, in what seemed like choreographed demands, Russian-backed officials there and in other regions that together were roughly the size of Portugal lined up to demand referendums on joining Russia.

The so-called people’s republics of Donetsk and Luhansk, which Putin recognized as independent just before the invasion, and Russian officials in the Kherson and Zaporizhzhia regions have called for votes.

Over the weekend, Russian Foreign Minister Sergei Lavrov said Russia would defend any territory it annexed using all the weapons in its arsenal.

US National Security Adviser Jake Sullivan said on Sunday that the United States would respond “decisively” to any Russian use of nuclear weapons, and had privately told Moscow “exactly what that would mean”.

Asked about Sullivan’s comments, Kremlin spokesman Peskov said on Monday: “There are dialogue channels at the appropriate level, but they are very sporadic in nature. At least they allow the exchange of certain messages urgently on everyone’s positions.” 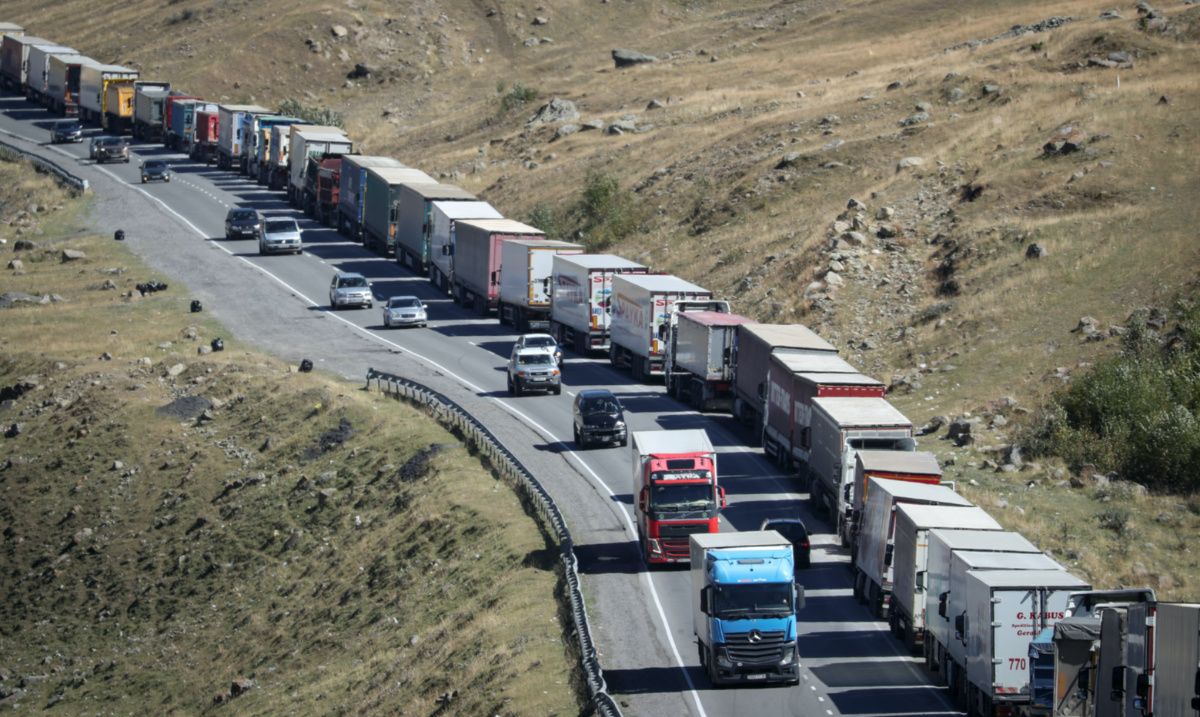 Travelers from Russia drive after crossing the border into Georgia at the station in Zemo Larsi/Verkhny Lars, Georgia, on September 26. PHOTO: Reuters/Iraqli Gedenidze

Movements towards the annexation of Ukrainian regions could occur quickly.

TASS news agency quoted an unnamed Duma source last week as saying the chamber could debate a bill on incorporating parts of Ukraine as early as Thursday, while RIA Novosti previously said that Putin could prepare to make an official address at a special joint session of the two houses on Friday.

None of the provinces in question are fully under Moscow’s control and fighting is ongoing across the frontline, with Ukrainian forces reporting more advances since they routed Russian troops in a fifth province , Kharkiv, earlier this month.

We rely on our readers to fund Sight’s work – become a funder today!

The exiled mayor of Russian-controlled Melitopol in the Zaporizhzhia region accused Russia of forcibly conscripting Ukrainian men from occupied areas into its armed forces and denounced the referendum as “a fake and a farce”.

Ukrainian Luhansk Governor Serhiy Gaidai said Russian-backed officials were carrying ballot boxes door to door, accompanied by security officials, and residents’ names were removed if they did not vote as requested.

Even traditional Russian allies such as Serbia and Kazakhstan have said they will not recognize annexation votes.

Moscow says voting is voluntary and turnout is high. When he held a referendum in Crimea after seizing the peninsula in 2014, he said 97% of the population voted for annexation.

– With reporting by Reuters offices