We often hear the word “genocide” today, and it undoubtedly denotes a vital concept. The word is usually dated to 1944, when it was coined by the brilliant Polish-Jewish lawyer Raphael Lemkin, who had been studying related concepts for a few decades. Surely, we think, Lemkin’s word was a new invention devised to describe a new phenomenon. But long before that, English speakers had another word that meant much the same thing, and in many cases – not all – it arose from strictly Christian and biblical origins, and commentaries on some key scriptural texts including j discussed. As a language and a concept, genocide has a Christian prehistory.

The word in question is “extirpate”, which begins as a biological term for uprooting or pulling up by the roots. Latin shakes means the root or the stock of the tree, so to remove it completely is to uproot it. This meaning enters English in the 15th century and “extirpating” is first recorded in the 1530s. To extirpate a people therefore meant not only to cause them terrible harm, but to end their biological existence. (The Latin word base means root, which gives us eradicate.)

Over the next four centuries, the word is used in various ways, including the peaceful end of a genealogical line. But particularly in the seventeenth century, it is often applied to biblical discussions, especially in the case of the biblical Amalekites, who were ordered by God to be completely destroyed. In the words of Exodus 17,

And the Lord said to Moses, Write this for the record in a book, and repeat it in the ears of Joshua; for I will entirely erase the memory of Amalek from under the heavens. …For he said: Because the LORD has sworn that the LORD will make war against Amalek from generation to generation.

Just to be clear, the word “extirpate” does not appear in any standard English translation of the Bible, but it is central to sermons and commentary surrounding this Amalekite command and related divine command to destroy the Canaanites. This sense of all-out war against a race or tribe became increasingly relevant as English speakers engaged in violent, at first religious struggles. As they fought successive enemies, they applied the name Amalekite to them, which was to be so completely destroyed that their memory would cease to exist. Generally, the word used for this process was “extirpate”.

Catholics were particular targets of Protestant and Puritan anger, due to their infuriating claims to Christian status. curses relating to these names. The hatred between the two religions reached terrible heights after the 1641 uprising in which Catholics attempted to wipe out Protestant communities. Protestants had dreadful memories of what they called “the most execrable plot hatched by the Irish for the universal extirpation of those Britons and Protestants.” The quote is from Sir John Temple’s The Irish Rebellion, first published in 1646 and regularly reissued over the following centuries whenever Britain faced great fright over a Catholic plot and possible religious emancipation. Immediately after the Irish Revolt, Protestant writer Daniel Harcourt complained, “How dear the Israelites are. . . paid for their cruel mercy in not rooting out idolatrous Canaanites,” and drew the appropriate modern analogies.

There are many artistic depictions throughout history of the Hebrews’ wars with the Amalekites and Canaanites, but the one I have chosen to illustrate this blog is quite striking. This is a detail from “The Battle with the Amalekites” by the Antwerp painter Pauwels Casteels, probably from the 1650s or 1660s, and it brings out the oriental and extraterrestrial qualities of the Amalekites well. Some are clearly in the Turkish military dress of the time, and their leader is African. The Hebrew warriors, on the other hand, are absolutely modeled after the Christian European knights of the 17th century, and they could be on horseback straight out of Bohemia or Austria. The painting shamelessly depicts a race war. 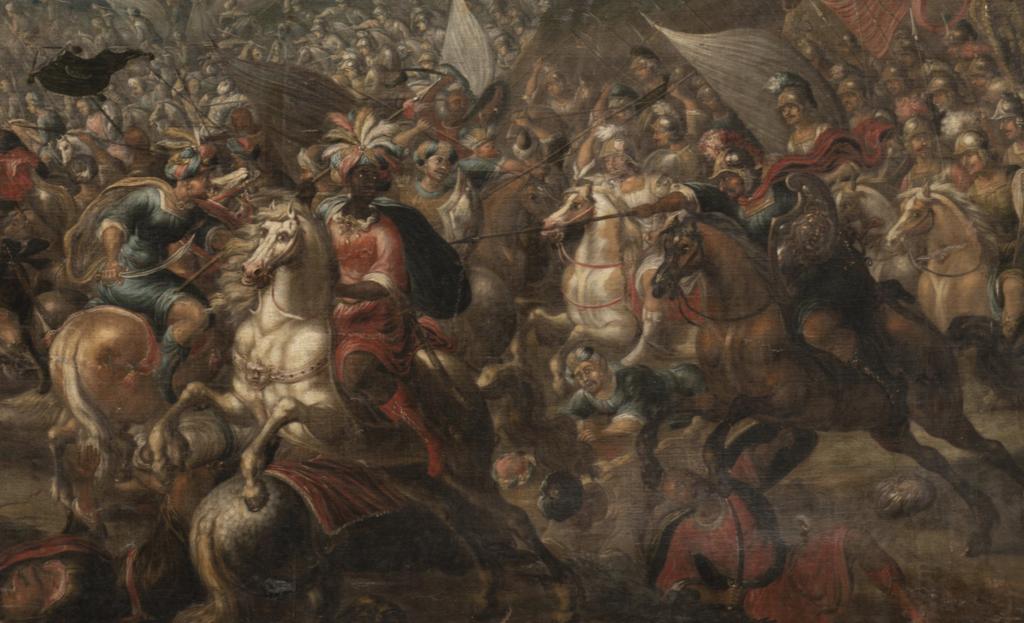 For the English, it is especially in the New World that “extirpation” takes on its full meaning. In 1730, the skeptical deist Matthew Tindal wrote a searing attack on mainstream religion in his Christianity as old as creation, which reasonably asked:

what prince can ever pretend to go to war and utterly root out those he is invading, when he sees that God has commanded Saul to destroy the Amalekites, male and female, infant and infant, oxen and sheep, camels and donkeys, for an indefinite period. wound made four hundred years ago?

Already at this early historical moment, Tindal is sensitive to the imperialist implications of the biblical text. If a nation lacked territory, he asked, would it not think

what the Israelites did to the Canaanites is a good precedent; and that they might invade a neighboring idolatrous nation, which never did them the slightest harm; and uproot not only men and women but even their innocent children to take over the country?

These observations applied strongly in the American context, where many settlers drew close analogies between Native American and Amalek populations, with the appropriate language of extirpation. In 1662, the pioneering American poet Michael Wigglesworth commemorated the victory of “a desolate, howling wilderness”. Finally, God destroyed those natives who had sought to harm his people:

Those accursed Amalekites who first raised their hands above

To fight against the Israel of God, they were terribly ruined.

Augmentation and Cotton Mather often used the Amalekite language to characterize their own Indian Wars.

Over the next century, themes of race warfare resurfaced in each new conflict. In a sermon preached in Boston in 1704, Henry Gibbs celebrated “God’s mercy in rooting out the enemies of Israel in Canaan,” specifically in his American Canaan. If later writers did not quote biblical texts explicitly, these ideas and language are certainly in the background. In 1763 the British commander Sir Jeffrey Amherst notoriously recommended to use blankets infected with smallpox to infect Indians. He told a subordinate that “You will do well to try to inoculate the Indians by means of blankets, as well as to try any other method which may serve to eradicate this execrable race.”

In the 1770s, Indians allied with the British proved to be among the deadliest enemies of the emerging American nation. In response, American soldiers and political leaders have turned to colloquial biblical language. These ideas emerge strongly in the conflicts described by Jeffrey Ostler, author of Surviving Genocide: Native Nations and the United States from the American Revolution to Bleeding Kansas (Yale University Press, 2020). I draw attention to an earlier article by Ostler in the William and Mary Quarterly entitled “To root out the Indians”: Native consciousness of genocide in the Ohio Valley and the lower Great Lakes, 1750-1810. As he shows, the Indians were acutely aware of possible plans to wipe them out entirely, and British agents no doubt encouraged such beliefs to stir up resistance to the new American nation. But Indigenous peoples also had their own damning motives for believing the truth of such accusations. In such debates, the word “extirpate” is often cited.

As President, George Washington hoped to buy Indian lands as a base for westward expansion, but if that failed, then the word he used for future policy was to “extirpate” them. Even the human Benjamin Franklin noted the devastation the rum had caused among the natives and wondered “if it was the design of Providence to root out these savages in order to make way for the cultivation of the land.” Disappearance was in the air.

So yes, the genocide mindset long preceded Lemkin, although the vocabulary differs. I won’t go into detail here, but we see a very similar trajectory with German words like rotten and vernichtenand here too we find the origins precisely in the genocidal passages of the Bible, as they have evolved over successive translations.