WASHINGTON (RNS) – A new poll finds most Americans are in favor of offering religious exemptions for COVID-19 vaccines, but express concern that too many people are seeking such exemptions. In the same survey, more than half of people who refuse to be vaccinated say that getting the vaccine goes against their personal faith.

The poll, conducted by the Public Religion Research Institute and Interfaith Youth Core and released Thursday, December 9, investigated ongoing debates over COVID-19 vaccines as well as emerging divisions over whether religious exemptions to injections should even to exist.

According to the survey, a small majority (51%) of Americans are in favor of allowing people who would otherwise be required to receive a COVID-19 vaccine to opt out if they violate their religious beliefs, compared with 47% who do. oppose such religious exemptions.

The divide, which the researchers noted has remained about the same since they began investigating the issue earlier this year, widens when respondents are broken down by party: only 33% of Democrats support exemptions religious vaccines, while most independents (53%) and a large majority of Republicans (73%) are in favor.

Even so, the majority of almost all religious groups believe there is no valid religious reason to refuse a COVID-19 vaccine, including Hispanic Catholics (68%), other Christians (68%), American Jews (67%), Hispanic Protestants (64%), White Catholics (62%), Members of The Church of Jesus Christ of Latter-day Saints (60%), Black Protestants (59%), White Protestants (56%) and other Protestants of color (51%).

Americans with no religious affiliation were the most likely to say there were no valid religious reasons for refusing the vaccine, at 69%, while white Evangelical Protestants were the only faith group with less than half ( 41%) said the same thing.

Two groups – white Evangelical Protestants and “other Protestants of color,” a category that includes Asian Americans, Pacific Islanders, and Native Americans, among others – were the only major religious groups of which less than one. majority (38% each) agreed that “too many people are using religion as an excuse to avoid COVID-19 vaccination requirements.” American Jews, in contrast, were the most likely to agree with the statement (72%), followed by Latter-day Saints (68%) and Americans with no religious affiliation (67%). Hispanic Catholics, Black Protestants, White Protestants, and Hispanic Protestants all hovered between 63% and 58%.

A majority of Democrats (77%) and Americans overall (59%) also said they think too many people are using religion as an excuse to avoid COVID-19 vaccines, but Republicans (41% ) and Republicans who trust far-right news sources (18%) were significantly less likely to agree. 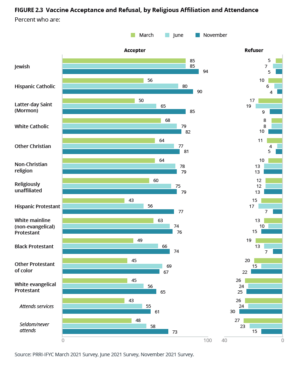 The investigation was conducted between October 18 and November 9, 2021, before the discovery of the omicron variant of the new coronavirus. While a handful of preliminary research suggests the new strain may produce milder cases, reports that it may also be more transmissible and at least partially escape the protection of two-dose vaccines have caused an increase in the number of ‘Americans looking for booster doses.

Faith groups and religious leaders have generally supported vaccines on the whole, and many have helped roll out the vaccine by partnering with government leaders to organize vaccination campaigns in their places of worship. Religious leaders have also actively promoted vaccinations across the world, with rabbis participating in vaccine trials and Pope Francis describing being vaccinated as “an act of love.”

Religious outreach appears to be working, according to PRRI data. Among Latter-day Saints, 46% said faith-based approaches impacted their decisions to get vaccinated, as did 27% of black Protestants and 26% of Hispanic Catholics. The numbers were generally even higher among worshipers who regularly attend church services.

“There is no reason for a priest to issue a religious exemption from the vaccine,” reads a letter sent to priests by the Archdiocese of New York. 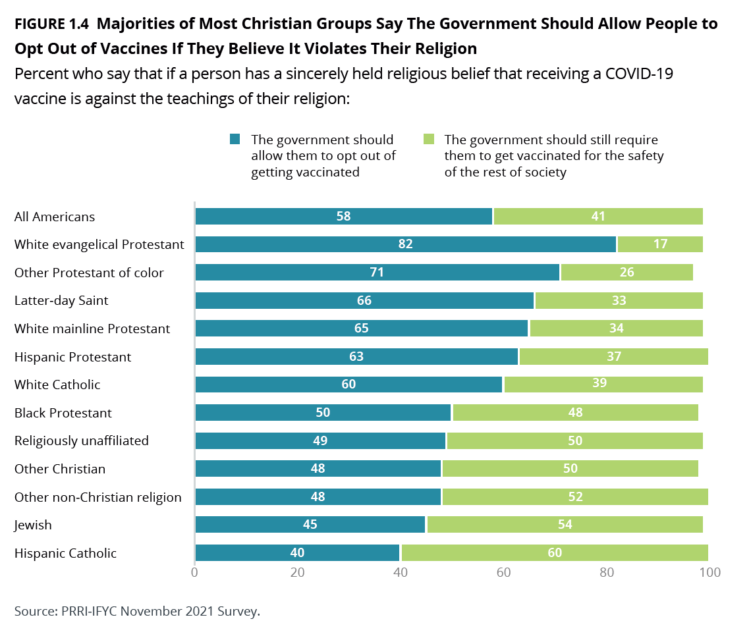 RELATED: Faith advisory board with links to Trump calls for religious vaccine exemptions for military personnel

Yet PRRI data underscores debates over faith-fueled vaccines that continue among some religious communities. There remains a vocal subset of Americans who express hesitation about vaccination or even emphatic anti-vaccine sentiment, many asserting their beliefs in a mixture of conspiracy theories and Christian nationalism. The percentage of vaccine refusals has remained roughly stable for many religious groups. This includes white evangelicals, whose vaccine refusal rate has historically hovered around 25% – the highest of any religious group.

Some conservative activists have actively encouraged people to withdraw from various vaccination warrants by asking for a religious exemption. Among their reasons: opposition to pharmaceutical companies who develop vaccines using cells that would have been originally derived from the tissue of aborted fetuses decades ago – a common practice used in the creation of many modern medicines. 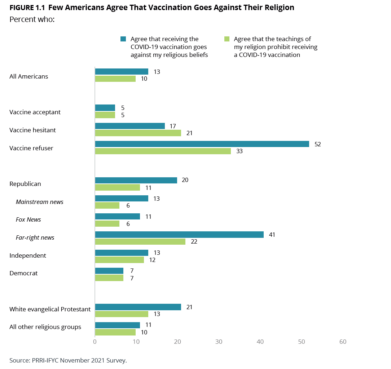 The debate escalated last month when religious leaders organized by a group of former Trump religious advisers sent a letter to U.S. military leaders urging them to allow service members to opt out of mandatory COVID vaccination -19 because of their faith.

“We should reward their bravery and the bravery of all our men and women in uniform, by not forcing them to choose between sincere religious beliefs and staying in the military,” the letter reads in part.

According to the PRRI poll, people who refuse to be vaccinated strongly support religious exemptions, with 85% of their support compared to 44% of Americans accepting vaccines.

Vaccination refusals were also the most likely to say they agreed with the claim that “getting the COVID-19 vaccination goes against my religious beliefs”, with 52% of them saying yes.

But the number changed when the question was edited slightly to focus on the teachings of their faith: only 33% said they agreed that “the teachings of my religion prohibit receiving a vaccine. against COVID-19 “.