I’m an agnostic with atheistic tendencies and a healthy dose of a recovering Catholic – who everyone thinks is Jewish.

I went to a church and no one paid me to be there. (I’m a photographer, I do weddings, it’s the only way to find myself inside a church in general. 12 years of Catholic school marked me and not in a good way).

I went there because I didn’t know what else to do. I donated money to World Central Kitchen, so they could continue to feed nearly a million people, mostly women and children, who fled Ukraine.

I donated money to other charities to pay for supplies.

But I feel what I felt after 9/11. Feeling the deeply human need to help those who are suffering, but not being able to do much.

Then I saw the ad in The Village Green. There was a Ukrainian church in Maplewood, and their priest invited the community to come and pray for Ukraine. At 6 p.m. tonight I went.

The sanctuary is a mix of 1970s architecture and Eastern Orthodoxy. A huge golden crown of a chandelier floats in the center of the space. It was dark for most of the service, but it was lit up and filled the room with warm golden light for part of it. I don’t know which part. I don’t speak any Ukrainian. The priest speaks limited English.

We follow, standing, seated and kneeling, while two of the faithful in the first pew play the roles of both choir and congregation. The rest of the small congregation is absent, working on the statewide relief effort, leaving a handful to say prayers with the priest each night.

The service is mostly sung. Apart from the prayer of the Our Father, there are no familiar touchstones that I can follow. The mixture of Ukrainian, singing and my total lack of knowledge of Ukrainian allows me to assimilate everything. All. I catch a word here and there, “…for the people…for the soldiers…keep them safe…” 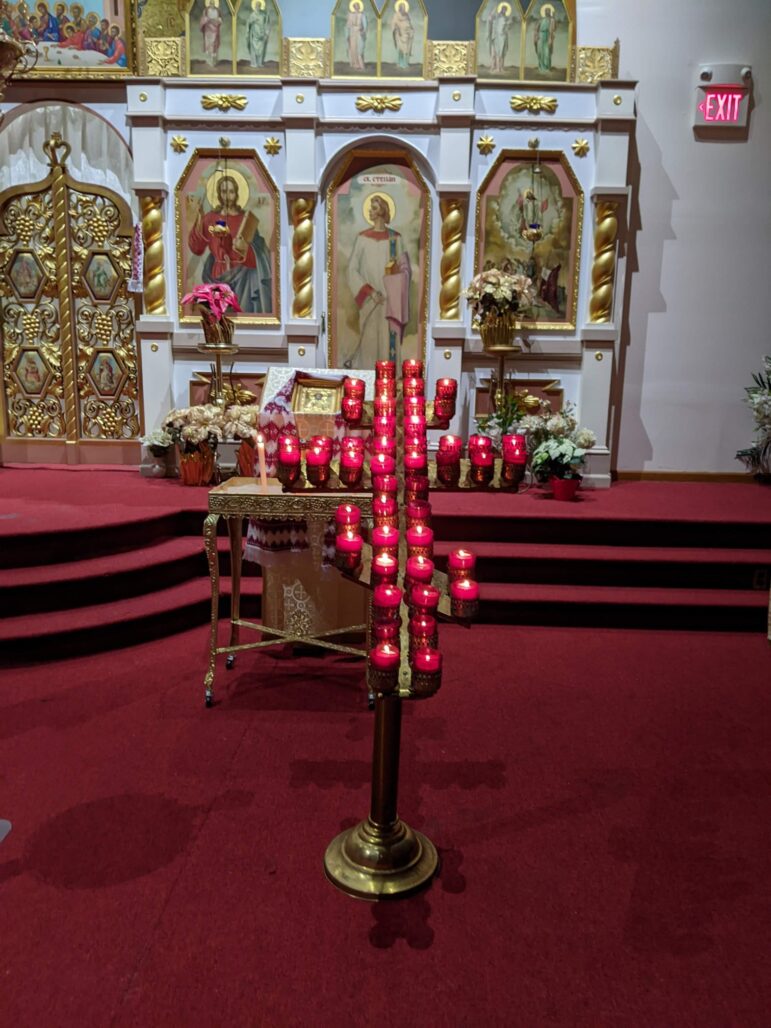 At some point in the service, what I would expect to be the homily, the priest, Reverend Sviatoslav Hot, turns to us and thanks us for coming. He apologizes for his bad English and tells us as best he can what his friends in Kiev tell him.

When he tells them that people are praying for them, it cheers them up. They can see and feel this and it helps them know that they are not alone. This world unites around Ukraine.

The priest tells us that two policemen from Maplewood are stopping to check on the church. They tell him: “We are all Ukrainians.

And I agree, right now we are all Ukrainians. 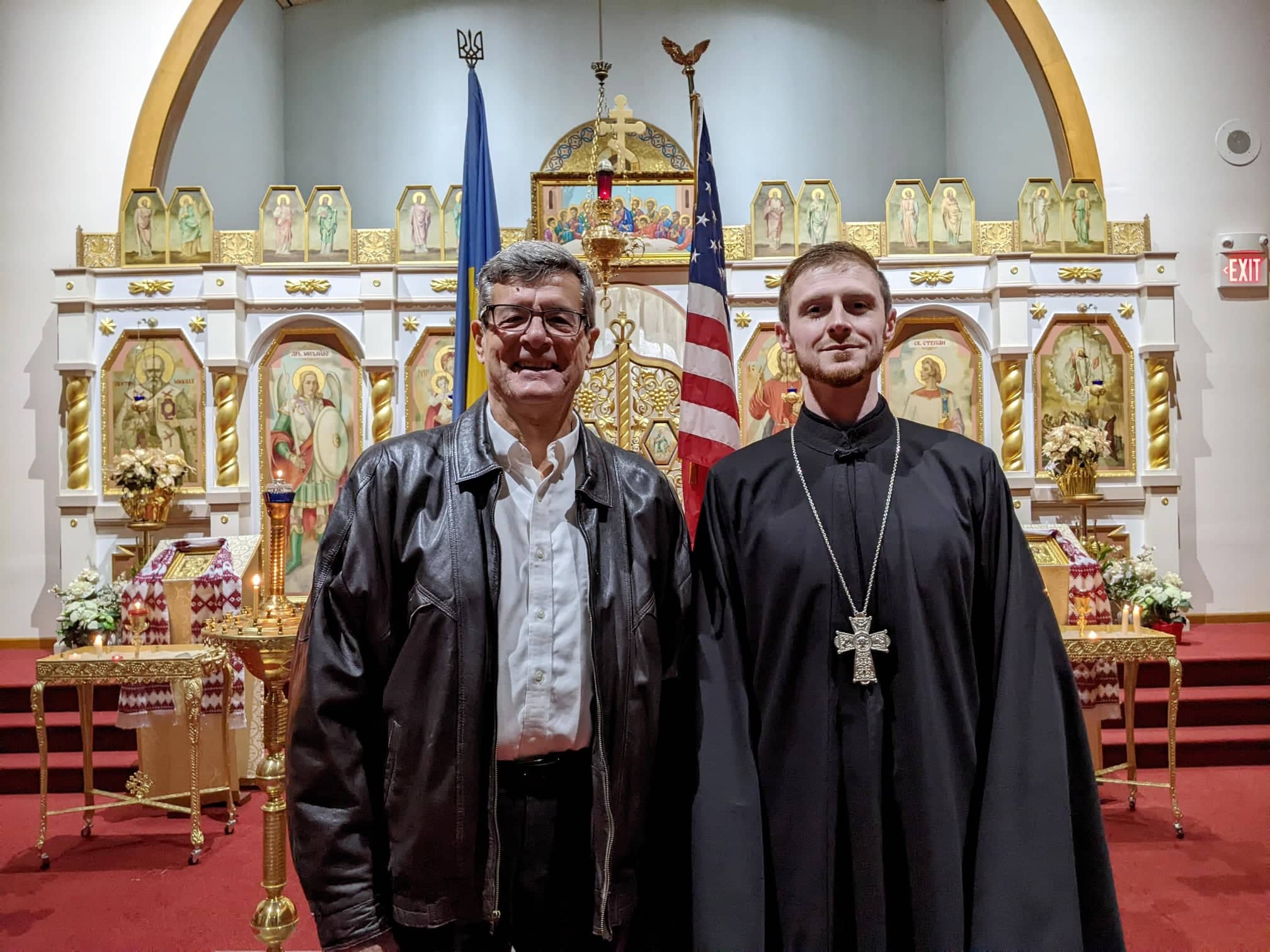 Want to help? The church collects supplies (a list is in the photos). Drop what they need. Money works too. But you can just show up at 6 p.m. any night or 10 a.m. Sunday, and just be there. And the simple fact of being there, in the room, allows the priest to tell his friends who are fighting for their lives, the lives of their families, that complete strangers, on the other side of the world, are supporting them. Think about them. And dare I say, praying. This outdated Catholic with atheist/agnostic leanings that everyone thinks is Jewish, is praying for them.

Ukrainian Orthodox Church, located at 652 Irvington Avenue in Maplewood. Do something. Bring the older kids to the service – it lasts 40 minutes. 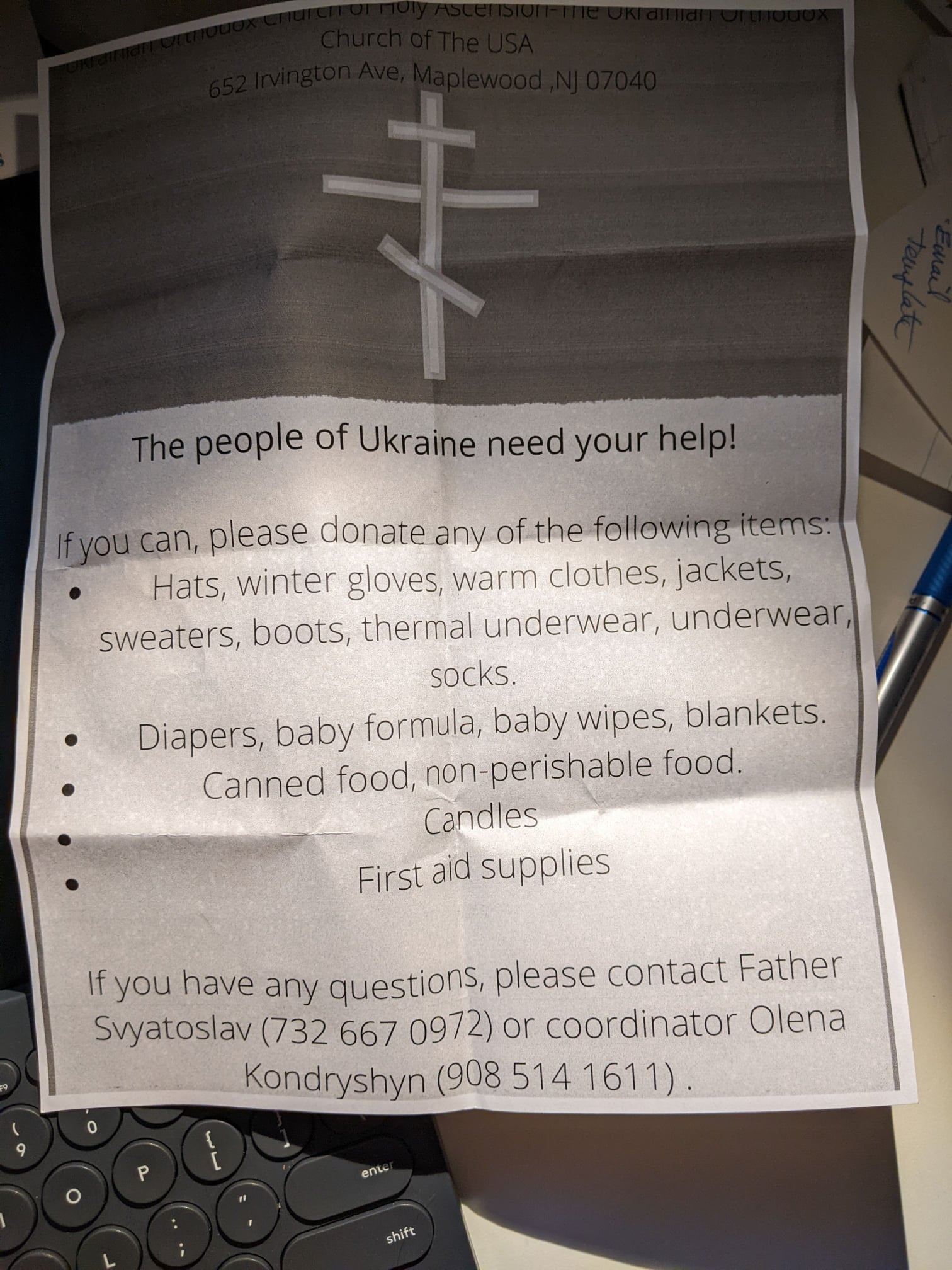